From Taos to Triora

Stress has been very hard to deal with, especially at the beginning of the trip. For example, we had to wake up at 4 am our last day at home to hit the road by 5. And then on our last day in Taos, we had to pack everything for Europe and Morocco very thoroughly and it took a long time. As we were packing that day, I said ‘Mom, I know you’re very stressed but I’m not as stressed as you! But I am still stressed!’ She had a lot more to do than me. I was just assisting her.

Traveling can also be stressful. On two of my flights, there were little kids behind me who kept kicking the back of my seat. I banged my head against the headrest in an attempt to signal my discomfort, but it didn’t work AT ALL! Luckily, our flight to London wasn’t very full so we got to move around and lay down on the empty seats to sleep.

On Wednesday, my mom, my dad, and I woke up on a plane from Dallas, TX to London, Great Britain. We were all really jet lagged and we could have felt much better than we did. My parents like to sit on the plane and fall asleep since there’s not much time to rest elsewhere, whereas I don’t want to miss a thing.

One really cool thing about Wednesday is that none of us officially touched a continent’s soil until we arrived in Nice, France later that evening. Man did we sleep well that night.

Before we left New Mexico, we went down to the Rio Grande and swam in the little streams that branched off of the huge river. I tried to skip rocks but I was quite unsuccessful most of the time. That was one of our last days in Taos😭😩😫😢. 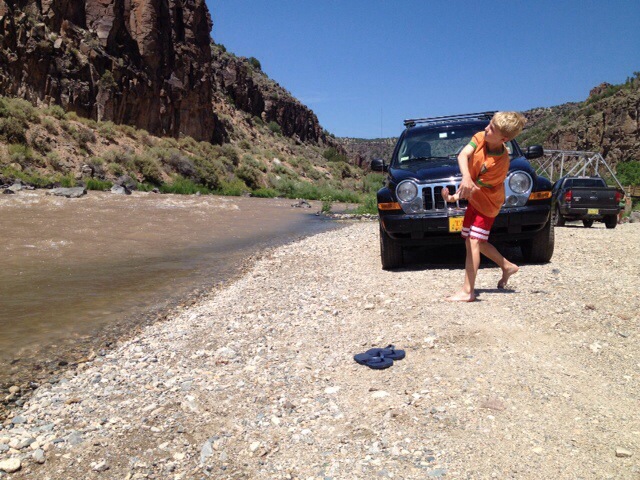 But I shouldn’t have been sad because just a couple days later I was skipping rocks on the beach in Nice. But did any of those rocks skip? None of them!

Now we are in Italy and it looks like a lot of the kids from my soccer team are around. Today I went down to the soccer field/basketball court and kicked it around. It started raining but I didn’t care so I stayed there for a long time. This weekend is Triora West. For three days, tourists from all over bring their horses to ride around Triora and wear their cowboy hats. It is basically Triora pretending to be the Wild West and it is always exciting to see the horses and ride the bucking bronco.

It is really cloudy here but still beautiful. Anyway, most of the clouds are under us. But some have been coming in the window. Here is a picture of the clouds.

This is me in the piazza at Bruno’s bar & café where I am using the wifi to publish this blog post! Do you like my cowboy hat for Triora West?

This entry was posted in Uncategorized and tagged Italy. Bookmark the permalink.

16 Responses to From Taos to Triora