On Tuesday night, we went to visit the Trevi Fountain. When we arrived at the Fountain, we got a huge surprise. It was completely dry and was covered in scaffolding.

Fortunately, there was a bridge going across it and we could still throw coins in the empty pool (#totalbummer😡). After that, we walked over to the Spanish Steps. There was some intense nightlife there, and there was no escaping the noise. There were people selling paintings, lasers, and much more touristy merchandise. 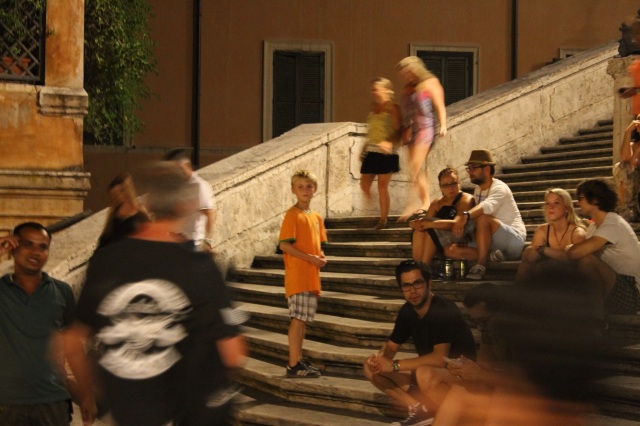 The Spanish Steps were featured in The Amazing Race, a show where teams of two race around the world. In the previous season, Flight Time and Big Easy, two former 🏀Globe🌍🌎🌏Trotters🏀, made it to the Spanish Steps. I thought it was so cool how I have stood where they have.

On Wednesday morning, my mom, dad, and I went to meet a woman named Gina, a friend of my aunt and uncle. She is from Boston, but currently lives in Rome and provides tours for people who come to Rome and the area looking to eat and drink some of the best food and wine that can be had. She told us about how to know the difference in qualities of gelato and told us of two awesome places to get gelato in Rome. We had already been to one of the places, and it was FANTASTIC though the other place was closed unfortunately for their August break. So, I hope my wish at the Trevi Fountain comes true which will mean I will come back to Rome again and hopefully get to eat some of Carapina’s awesome artisinal gelato.

Later that day, we went to Vatican City (another country to cross off my list). It was huge for the smallest country in the world. We saw St. Peter’s Basillica, but we didn’t go inside because the line was bigger than the church! Dad told me about the Pope and how he likes to drive around Rome in his car, even with all the security being at the Vatican. I actually saw two of the Pope’s Swiss guards! 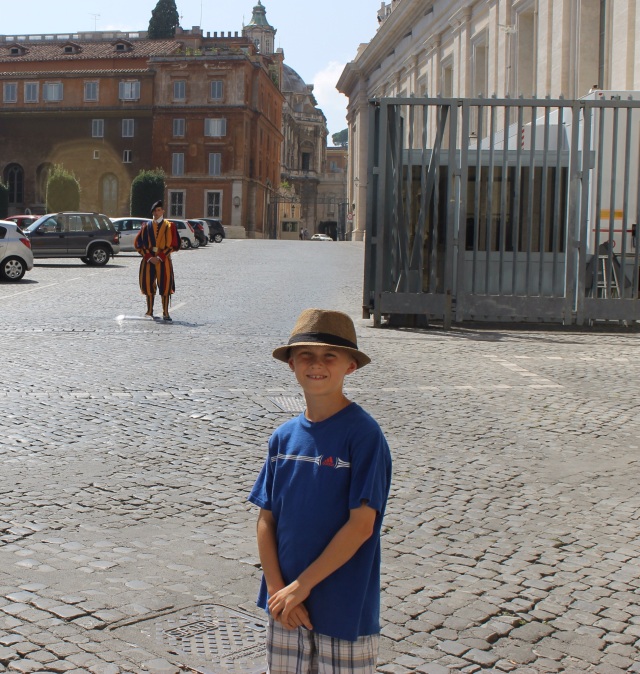 We walked over to the Jesuit Curia to check out where Father Anton, the person who married my parents, lives when he is in Rome. 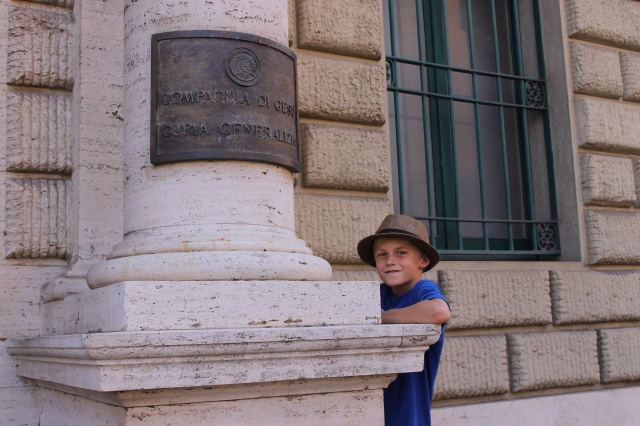 When we left and walked along the Tiber River, I caught a glimps of a €20-cent coin. I picked it up and asked the lady standing there if it was hers. She said no, so I kept it. Then I got an idea. Maybe the Tiber River has the same effect if you throw a coin in as the Trevi Fountain does, so I tried my luck and chucked it into the water. Hopefully I didn’t hit a fish!

That evening the two restaurants we had planned to go to if the other was closed were both closed, even though the internet said they were open. In August, most Italians go on holiday and close down their businesses for the whole month. We wandered around looking for somewhere else to eat, when we came across a Chinese restaurant. We were all really happy because some food other than Italian food was a nice change. Plus we got to talk about the awesome food we will have when we go to Asia later on. I am always happy to have fried rice!

On Thursday we thought our train back to Arma di Taggia left at noon, but we checked our tickets and found that it actually left at 2:00 PM, which gave us two extra hours. We decided to make the most of our time so we went to the Circus Maximus to check out the racecourse that was finished around 340 BC. If it were sill intact today, it could hold 400,000 people.

The information boards said that four different colored teams would race around the track seven times. People came from all over to watch and they sat according to their class, just like at the Colosseum. Some of the earliest examples of people betting on sports events happened here. Some historians say that it was the beginning of the end of the Roman Empire, because people cared more about food, money, and games than the larger society. There is a term you may have heard – “Bread and Circus”. 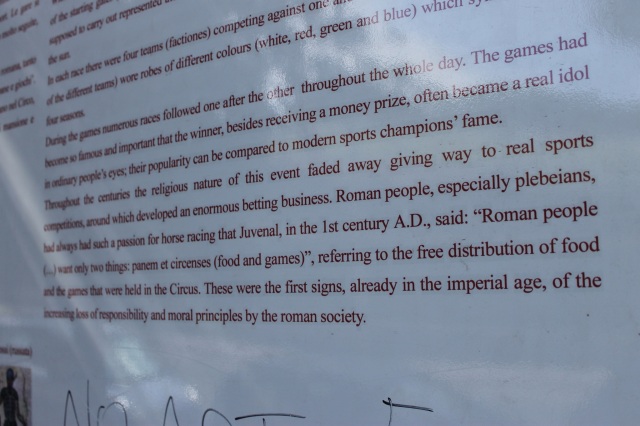 This translates into food and fun … come to your own conclusions. Bread doesn’t interest me much, but yesterday’s lunch filled me up (click here to read more). Rome Rocks😝🎸🎷🎸😝.