A busy week in Triora

Last Sunday, Triora hosted “Strigora”, an annual celebration for the village’s history. Strega means witch in Italian. Back in the 1500s, Triora had witch trials, like Salem, Massachusetts. Tourists from France and other parts of Italy come up for a day. They have live music in Piazza Collegiata and benches at all of the bars for lunch and supper. People volunteer to cook grilled meats for people. In fact, my soccer coach cooked my pork chop!

Then, at 9:00 pm, the skits start. A troupe of actors put on plays all over the village about witchcraft and disputes that would have taken place back during the witch trials. Each play happens 5 times with 30 minute intervals in between to allow you to get to the next play when it starts.

On Monday, I went to my friend’s birthday party. His name is Loris and he turned 13 years old. Obviously, I didn’t have a clue about what it was going to be like, because I was the only one to bring a present. I got Loris the Italian version of ‘The Lego Movie’. Loris’ mother bought pizza for us while we walked up to a picnic area near the post office. We joked around a bit and waited. Soon enough, Loris’ mom pulled up with the pizzas in the backseat. Luckily, I had brought 2 rice cakes with me to use as my pizza crust, just enough for the full margherita pizza I had. We had burping contests with the sodas as we chomped on our pizza. Then, as we were playing hide-and-seek-tag (which is called ‘nascondido’ in Italian), one of my friends tripped and fell. She now has a sling on her arm. It didn’t ruin the party, though. She just took it easy for the rest of the time. After that, we went and got gelato.

Yesterday we went on a hike down the valley to some pools and waterfalls in the Argentine Valley. We passed San Bernardino, a chuch from the 1300s. It still has paintings from when the buidling was finished. Unfortunately, it is always locked up and you can never go inside, but at least the windows are big enough to see inside. 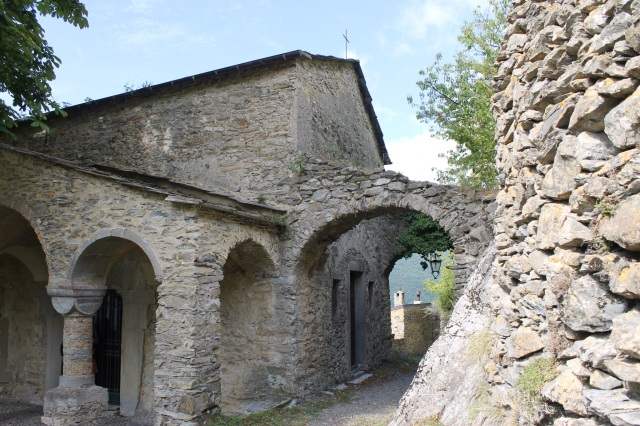 Then we walked down to the bottom of the valley and across a very old bridge.

I got a minor nettle sting, and the water helped anyway. The river was freezing cold, but I guess the tadpoles didn’t mind. There were loads of them eating algae or lying in the sand. I even caught one. Lots of the tadpoles were even turning into little frogs. This process is called ‘metamorphosis.’ A tadpole is to a frog as a caterpillar is to a butterfly … thanks to metamorphosis! Speaking of animals, there was a baby bat flying around and it really scared me and Mom.

On the hike back up to Triora, Mom was so busy looking for snakes to be afraid of that she missed this guy just sitting on the stone wall. 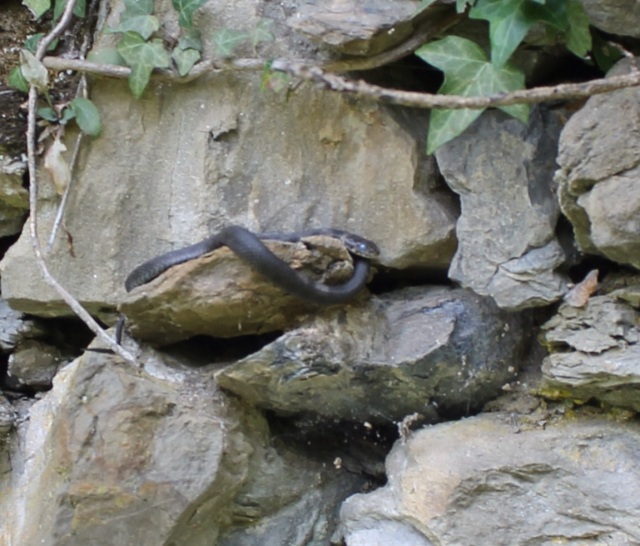 When we were setting up to take a second picture, I guess the snake didn’t fancy having his picture taken, because he crawled right back into a crack in the wall!