Yesterday, we hopped in our car to drive to Nice for our flight to Marrakech. We left at 1:00PM for a 5:00PM flight. Once we got on the toll roads, we had a huge surprise. The lines for the toll booths were crazy, I tell you, crazy! The first toll had an hour-long wait. The next one had a half-hour wait. We were so worried that we were going to miss our flight that Mom started thinking about hotels to stay at in Nice that night. Fortunately, we ended up waiting for our flight; we were on time and the flight was delayed by 15 minutes.

Here I am on the flight, filling out our landing cards for Morocco. Landing cards are forms that tell the government of a place who you are and where you are from if you are landing in a new continent or a new country. 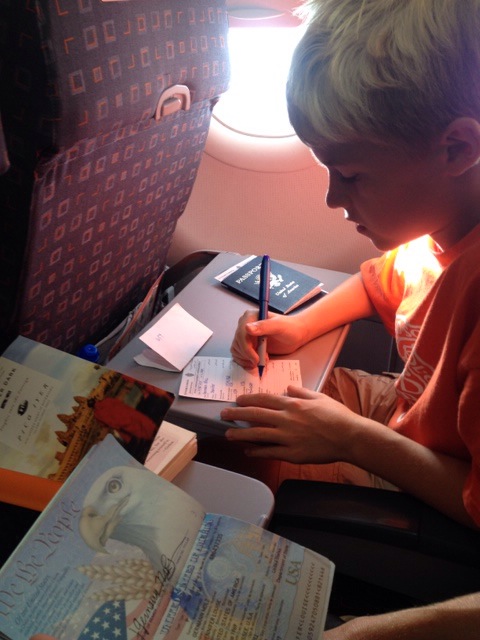 And here is a photo I took from the plane window. You can see where Europe ends at the tip of Spain and where Africa begins. 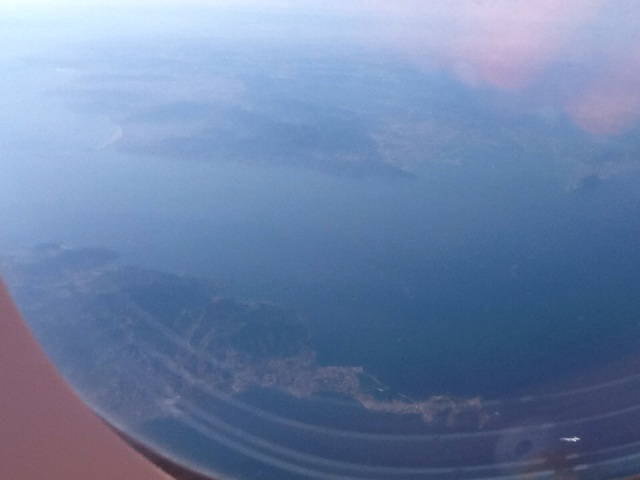 We landed at the airport and I spotted two red flags with green stars in the middle. I had been wondering what the Moroccan flag looked like, and I took that as my best guess. We walked across the tarmac. As we entered the airport, I saw crazy crowds of people with kids, people wandering around looking confused, and many more different situations all going on at one time. When we got through immigration control and collected our suitcase, we headed outside for the bus. Here we were on the third continent of our trip!

My Dad had been telling me about people who might try to persuade us to take their taxi or go to their hotel, and I had my first real life experience of this right there. We were waiting for the bus and a man asked us if we wanted a taxi ride. But Dad responded that we were going to wait for the bus. Soon, Bus 19 appeared and we hopped on. While we were driving, we saw donkeys and camels. The donkeys were plain stubborn and the camels were either working or sitting down.

The bus brought us to the very famous square, Jemaa el Fna, which was rocking on a Saturday night. Luckily we met a very nice couple on the bus, Moe and Tina, who helped us get oriented so we could find our riad. A riad is a large house with a courtyard in the middle. Most of them are very old, but some have been renovated and are guest houses now. Here is a picture of me in our riad courtyard. 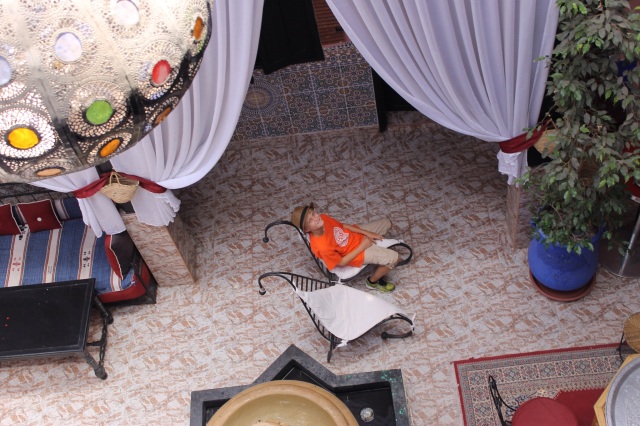 As we wandered through the large crowds of people looking for the Cafe de France, which was near our hotel, I felt my hand in my Mom’s hand getting sweatier. Nervousness overtook me, inevitably, because I had never seen anything remotely like this before. Even the piazzas in Rome or the plazas in Peru weren’t as crazy as this. First of all, the square was full of people, lights, food, smoke, drumming, storytellers, orange juice guys, horse-drawn carriages, cars, motorbikes, and even more that I couldn’t see. Second, the size of the square surprised me; it was so big! 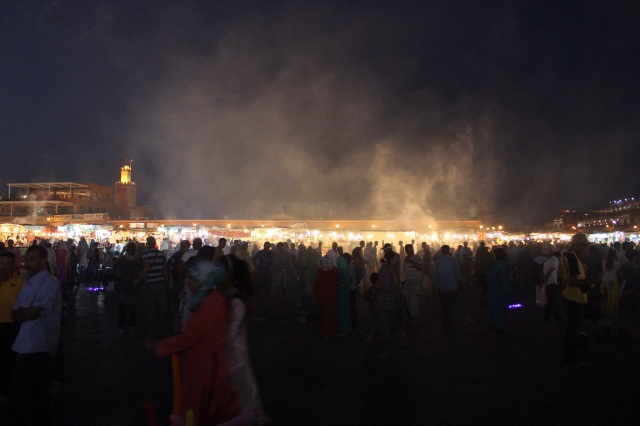 After we dropped off our bags at our riad, we headed back into the square to find something for supper. Many people wanted us to eat at their tables, but we found a great place to have some brochettes (grilled meats on skewers), lamb chops, french fries, and a Sprite. I ordered a Sprite because I couldn’t drink the tap water. 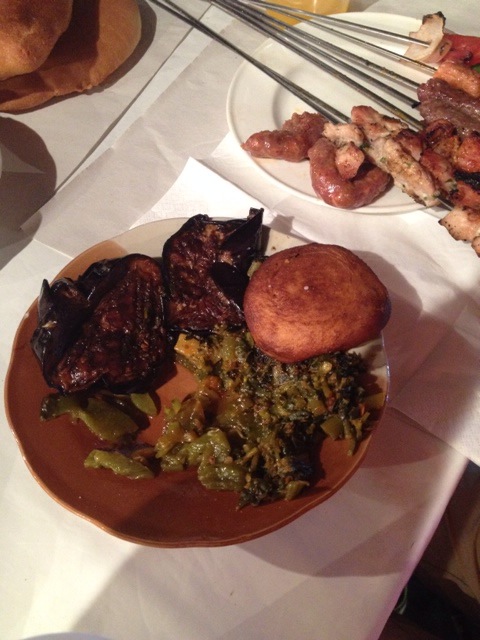 Sunday morning, we walked through the souks to go to the Ben Youssef Madersa and the Marrakech museum. You are probably asking yourself, what is a souk? The souk is part of a market with a lot of shops or sellers aimed at one topic, such as hats, musical instruments, food, olives, clothing, and much more. So far we have only seen a little bit of the souks.

Here are some pictures from the Medersa and the Museum. The Medersa was a school for boys built in the 1100s and more than 800 boys lived there. As we were entering the Medersa, a guy on a bike with a monkey on the handle bars whizzed past us and around the corner! But that’s not the end of my animal sightings for the day.

Here are some pictures from the Medersa: 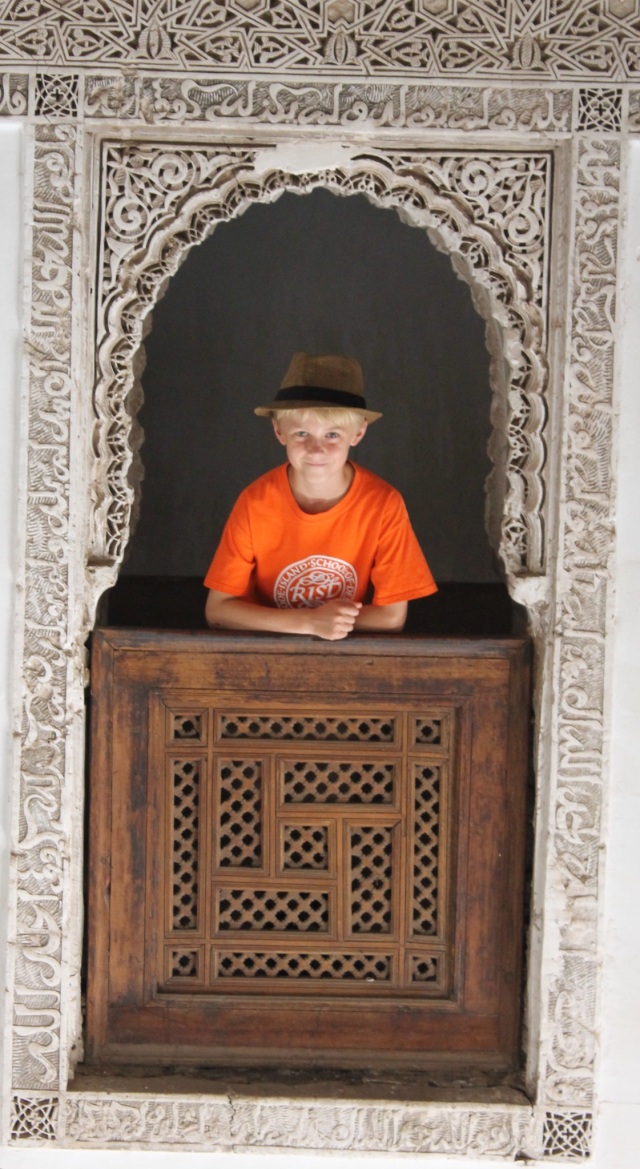 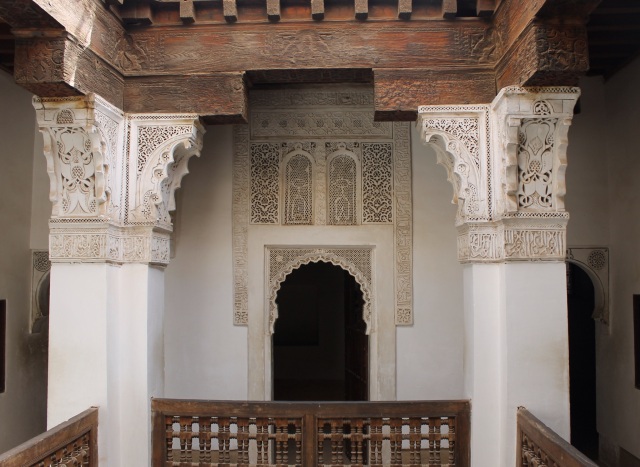 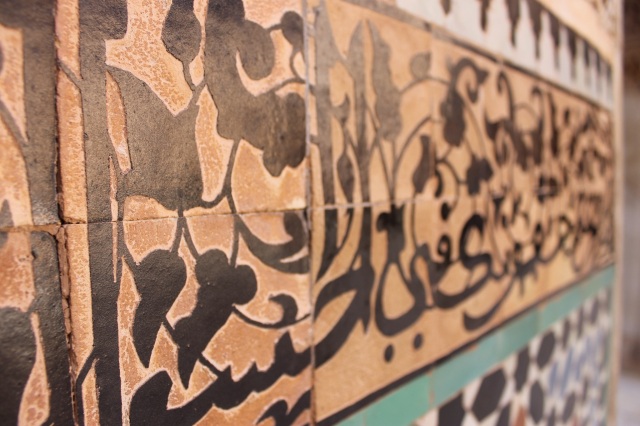 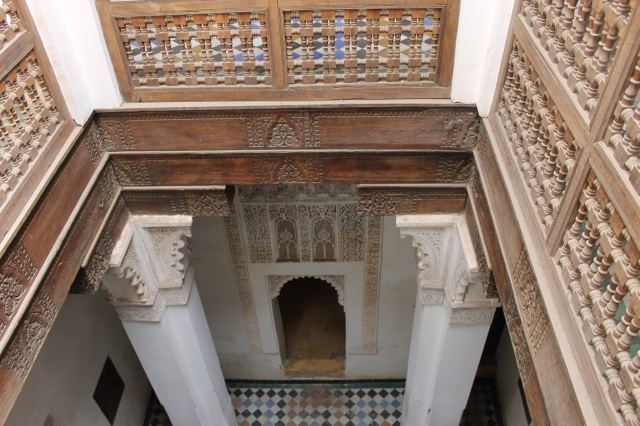 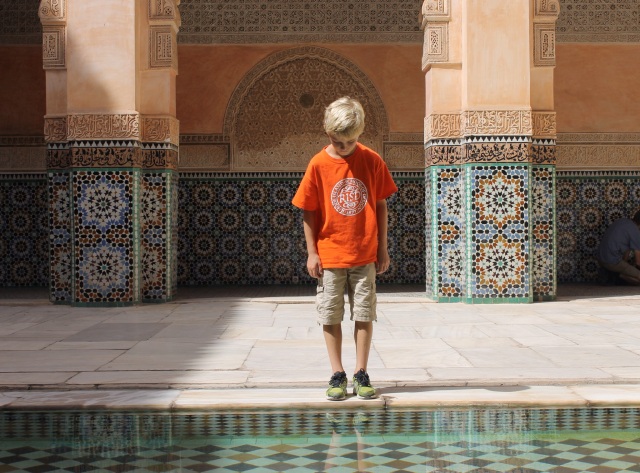 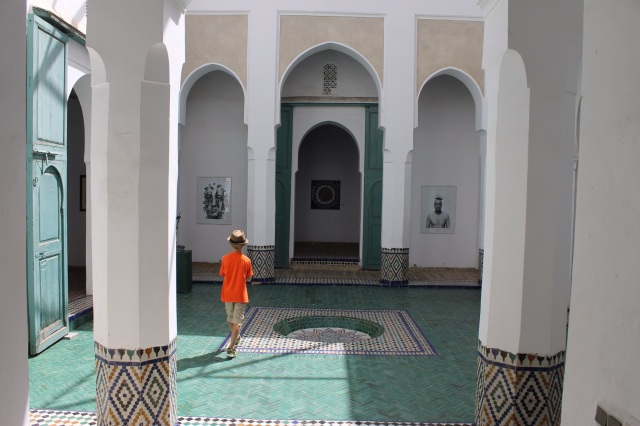 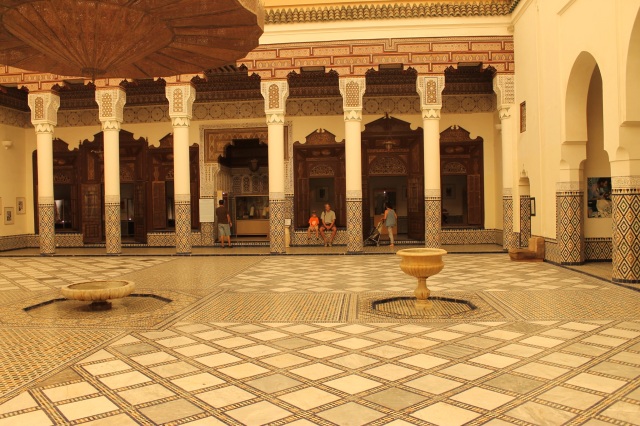 On the way back, we found the hat souk where Berber women sell the hats and baskets they have woven. This is also where I saw some cages with turtles and chameleons in them at a herborist’s shop called Ahmed Ben Brahim on Rahba Lakdima. I was looking at one, with Mom’s camera dangling around my neck. Then the store keeper saw me and came out to introduce me to one of the chameleons. He even insisted that I touch the chameleon and he let me hold it. It was awesome. He took us inside his shop and put the chameleon on a carpet. Unfortunately, the chameleon kept walking across different colors of the carpet, so he never got the chance to change colors. Then the shopkeeper put him on a string on the wall, and he was able to climb up it with his sideways claws. 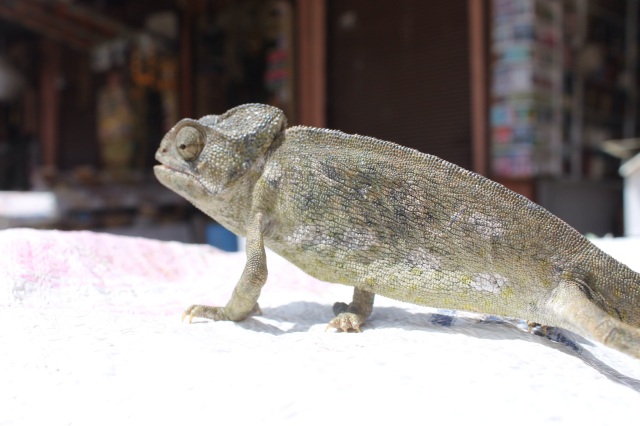 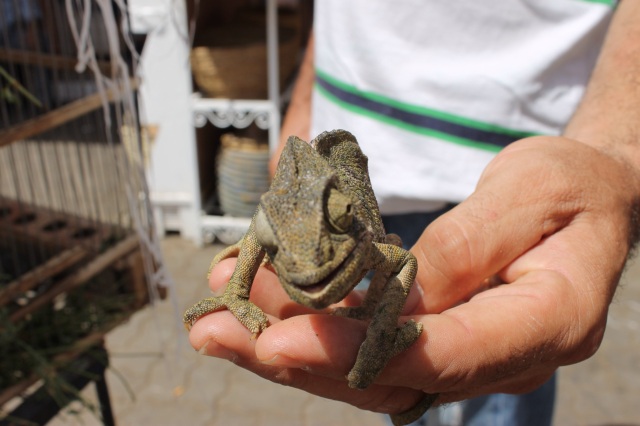 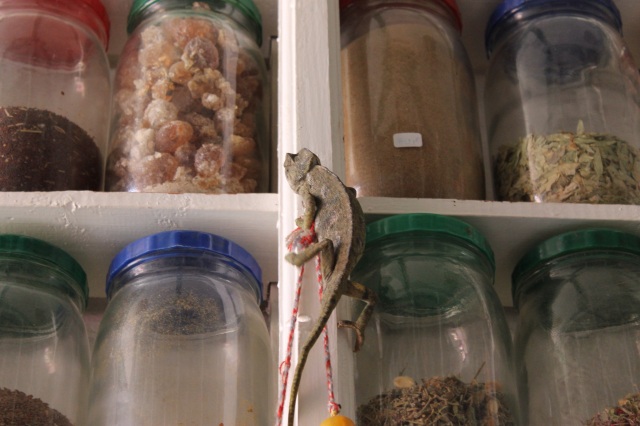 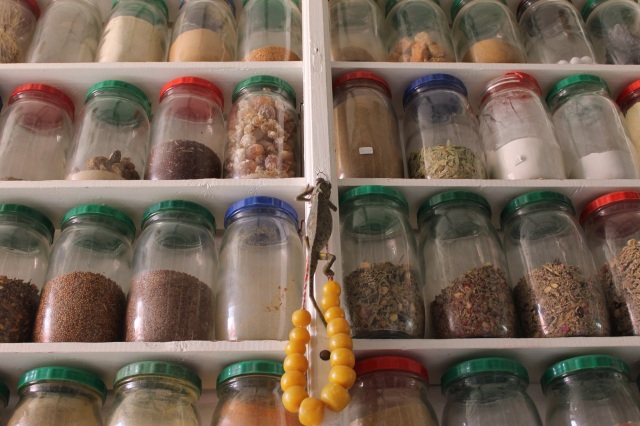 The shopkeeper had another surprise for me. Out of nowhere, he pulled out a baby iguana! 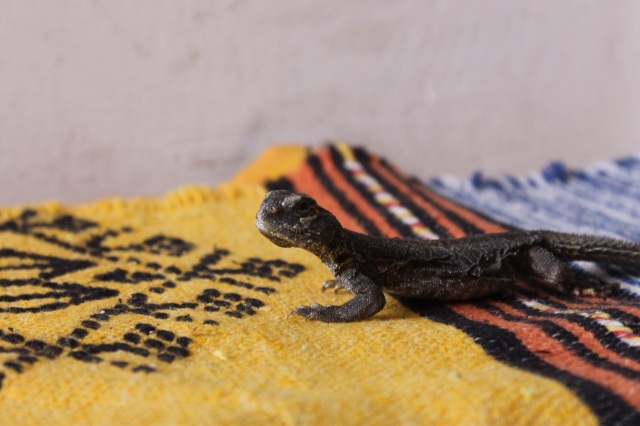 We ate lunch at a cafe overlooking the souk. I had my first taste of tagine. It was chicken with olives and lemon baked over a fire in a special pot. 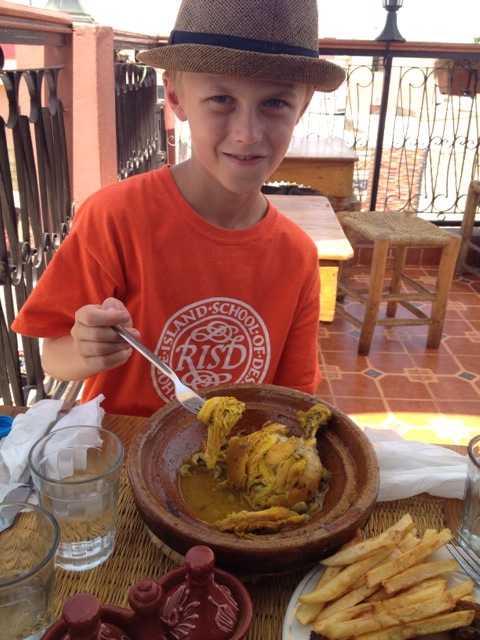 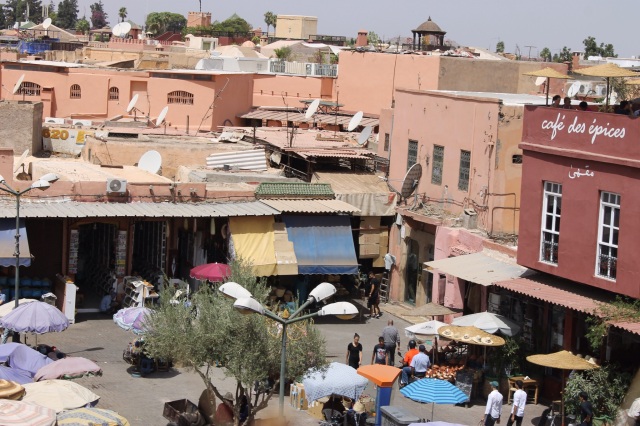 In the afternoon, we stopped for a coffee and ice cream at the Cafe de France overlooking the Jemaa el Fna. Well, my parents had the coffee and I had the ice cream. That was my first time to have Moroccan ice cream. After recharging our batteries at the riad, we went out for dinner and to walk around Jemaa el Fna and the nearby Koutoubia mosque with its famous minaret. A minaret is a tower on a mosque, and you can hear when they say the call to prayer from there.