(Can you figure out what the title means?)

This week there was something special in the air in Triora! One of our friends organizes an annual music course, ‘Triora Musica’. This year the participants sang music by William Byrd who lived in the 16th and 17th centuries! It is the music that monks sing before they go to bed. I had quite a good time! Some of my friends were there and I got to sit with them. 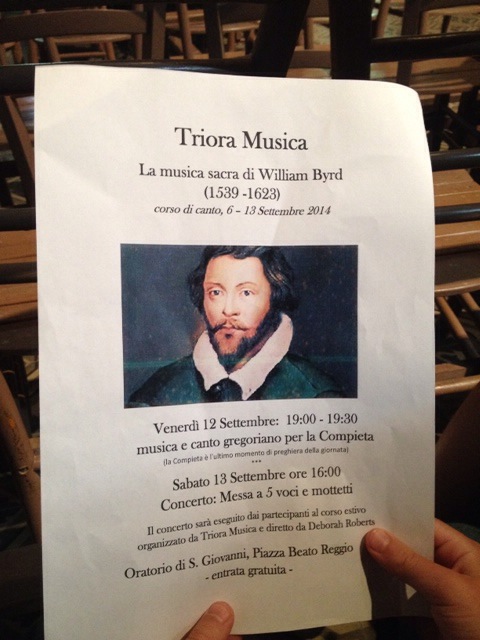 Yesterday, we went to the beach at Arma di Taggia and the weather was perfect. At the end of the day, I conquered my fear and jumped off some large rocks into the sea. Ever since I was really little I have watched the crazy teenagers do flips and 360s off of the high rocks. Anyhow, I made my run and soared through the air landing in the water, just past the dangerous boulder below. I did it many times and to be honest I want to do it again!

On the way home, we stopped in Aggagio Inferiore at Fontanna dell Olmo which is a restaurant run by a young couple who had their first baby 11 days ago. They only serve local ingredients — they call it 0km menu here and there are many agritourismo restaurants in this valley. For me, they made some special trombette risotto and an awesome mozzarella and tomato salad. Yum!

Next to us, there was a family from Berlin with a really cute little boy named Luke. Luke’s father told us he played American Football for over 20 years in Germany and that he actually met Jon Elway in Frankfurt. Elway was before my time so I told them I support the Pats and Tom Brady.

Tomorrow, we are heading back to New Mexico. I’m having mixed emotions about leaving Italia and going back to America🎭😂. We will only be there for two weeks before we leave for Southeast Asia! I’ll miss many things about Italy, such as: gelato, the fact that I can walk down to a local soccer pitch in five minutes, the beach, gelato, gelato, did I already say gelato🍦?

(PS: Here’s an Arabic letter that I learned in Morocco, and I think it looks like a smiley face:ت)