On Tuesday, I visited TISA, my grandmother’s school. I told a 6th grade class about this website and what I’m doing this year. I really enjoyed it!!!

Later that day I got a hair cut. We went to a 💈barber💈 that took FOREVER, but did a really nice job. Here’s a before and after.

Then we picked up my grandfather and headed out to the Taos Pueblo for the San Geronimo feast (they didn’t allow photos, sorry guys, but here is a promo I saw in a magazine). 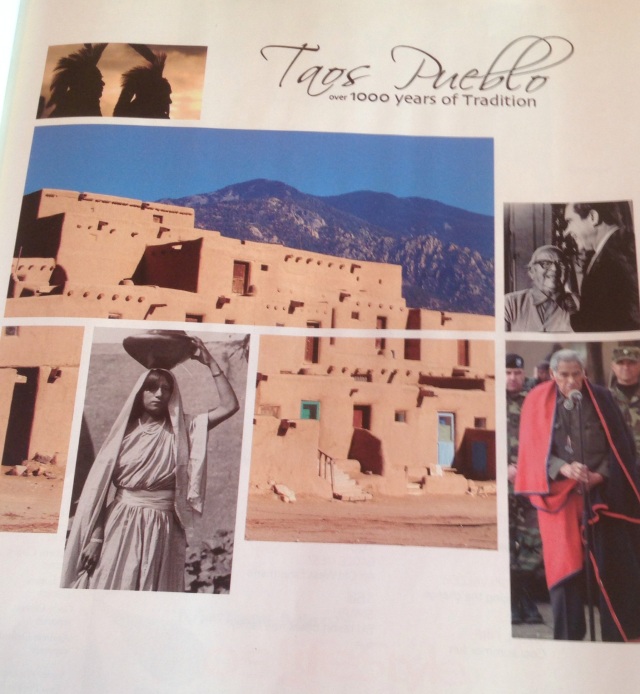 It was a long drive and wait to get into the Pueblo. When we got out of the car we had to watch our step walking out of the parking lot because of horse poop (Elliot translation: dangerous dung).

When we walked into the actual festival, the environment reminded me of Morocco. All of the food (I had a snow cone) and people (more dogs than in Morocco) was very, well, flashbacky. People also gathered in a square, like in Morocco, and there was drumming. Luckily there were no snakes, though!

Immediately, I noticed men in white and black paint stripes who were committing little naughty crimes such as stealing food and kids (they would return the kids, but not the food.) Later we found out that they were supposed to be ghosts.

Then there was a pole, where people race trying to climb it. At the top there was a dead sheep and food. Everybody in a circle around the pole to watch the event.

There were various stores selling things from smudgesticks to arrows and pottery. It was really cool seeing the insides of rooms and the architecture of buildings.

The Taos Pueblo has been inhabited for more than 1,000 years. It is a UNESCO World Heritage Site. The Taos Pueblo’s most popular fact in its history is the return of the Blue Lake. In 1906, 48,000 acres of land (including Blue Lake, one of their main water sources) were taken from the Taos Pueblo Indians. Roughly 70 years later Richard Nixon signed a bill to return the land to the Pueblo for free!

When we were leaving, I spotted a ladybug🐞 on my grandfather’s shirt. I took it and let it back into its natural habitat. It was so cute!!!

Watch for my next post, which will be from Thailand!

1 Response to The Taos Pueblo